Enhancing a Weller VP700CE to have better sucking capability, quick and dirty. 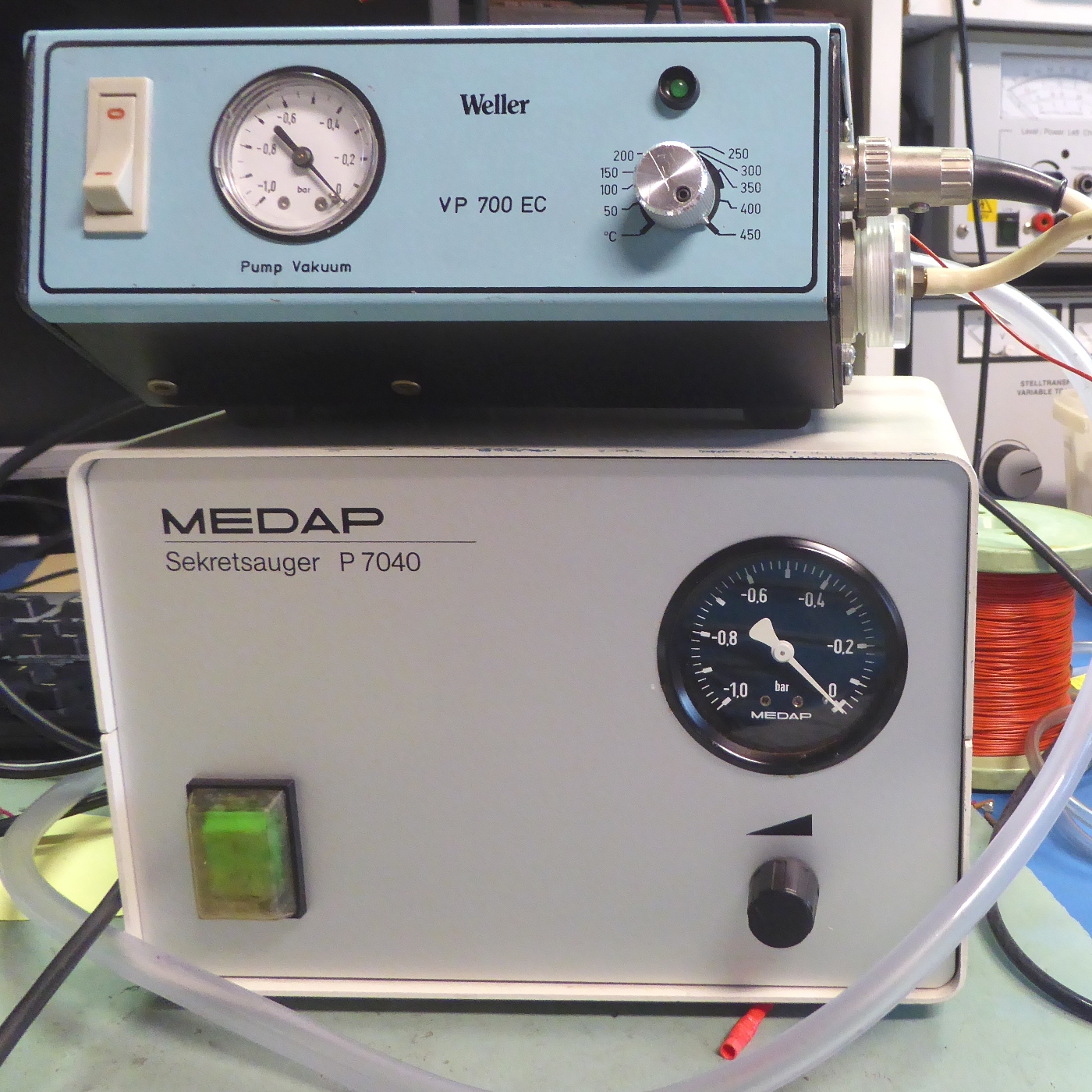 The Weller VP-700-EC desoldering station is a unit having an internal suction pump, two filters and heating electronics for the soldering iron. It works on 24 Volts AC, and it has a footswitch to operate the pump.

Because of unsatisfactory suction operation, I tried to modify it before, by eliminating one of the filters and putting in an extra pump, instead.

Still, it kept being rather unusable.

During May 2021, I found a nice suction pump at a dump shop, it is a medical unit, and it has one motor operating two pumps on each side of its shaft.

I decided to buy a box of pneumatic stuff on "marktplaats" to have some options to tinker with the pump and it was decided to use it to try modify the Weller again.

The theoretical and practical mind jogging ended up in a practical solution which will stay as is.

All component choices are based on being at hand, and not necessarily the most ideal choice, no precise calculations for ideal operation were done.

The sucking pump unit has a funny name: it is called "Sekretsauger".

Inside, there is one motor having a pump at each shaft end, which makes it about twice as powerful compared to the Weller one.

The indicated pressure is around -0.75 bar when no flow is present.

The knob on the front is a pressure relief, it is never used. 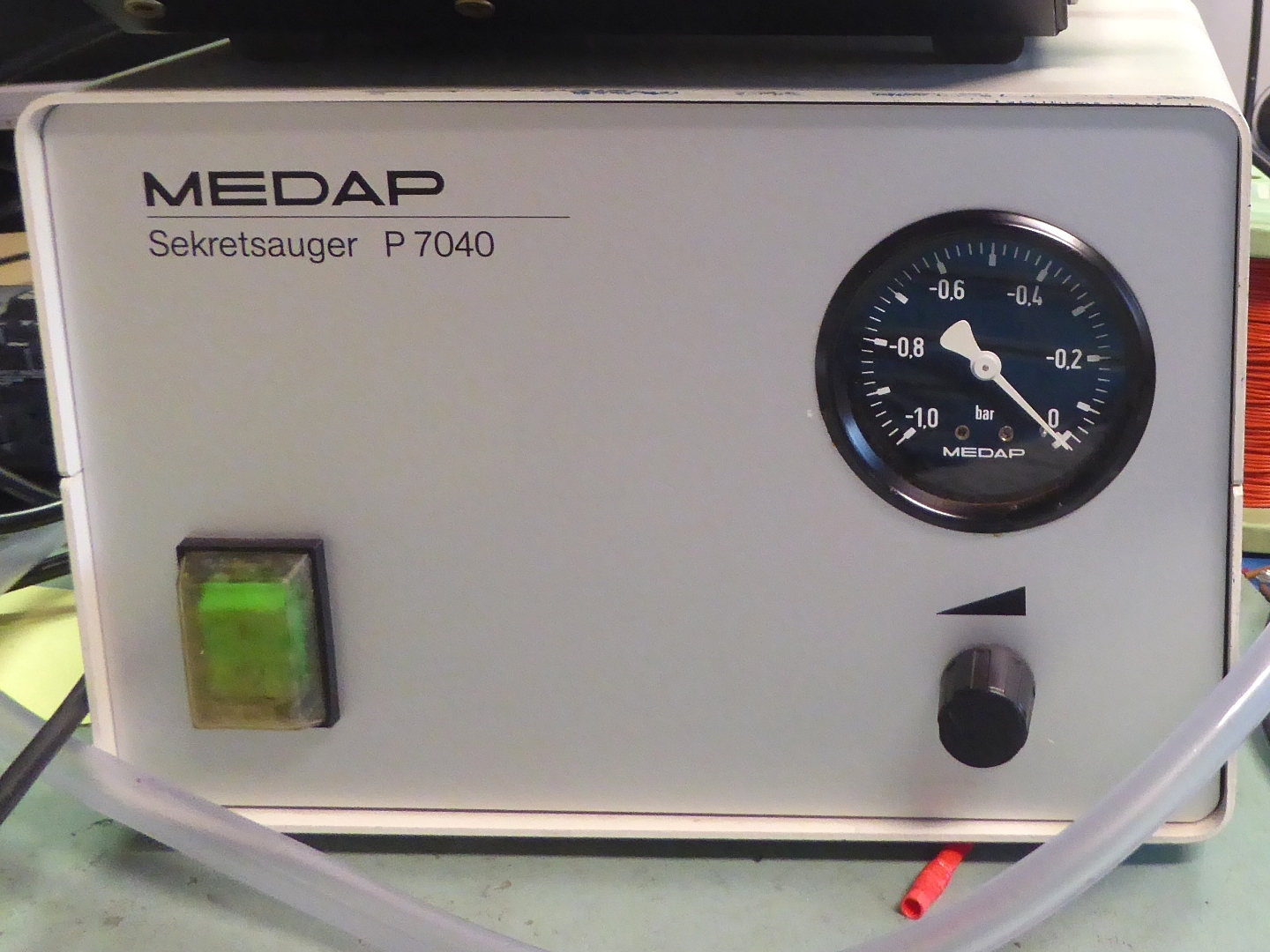 The desoldering station as it was:

The station I modified before. On the picture is a little black pump, where originally resided a second filter.

Left from it, a metal block carrying a voltage regulator, making 12 Volts, as this pump was a 12 Volts one. The Weller pump is a 24 Volts one.

It was tried to put it in parallel and in series. Still, the end result was very disappointing, vacuum buildup was much too slow.

The unit simply could not keep up when one of the "larger diameter" nozzles was used. The fact one uses these, when the amount of solder to be sucked away is a little bit more, contributes to the fact the process is too slow and also the nozzles clog up much easier.

On the left, a little circuit card can be seen, this one steers the desoldering iron itself, I do have no information on how it works, exactly. Of course, this card stays in, unmodified. 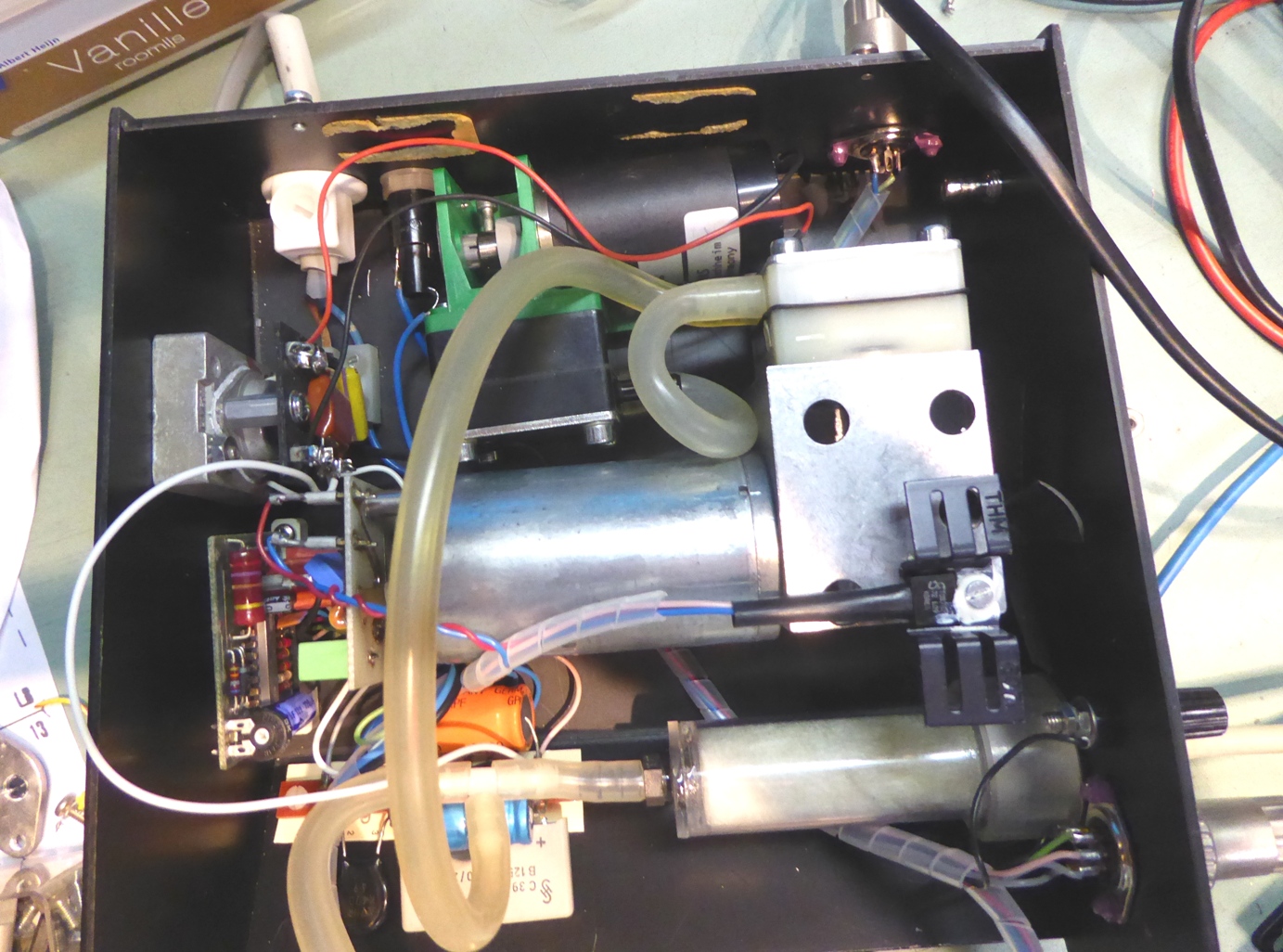 The unit was demolished, and some extra holes were drilled to accomodate:

- a hole for moving over the footswitch attachment

- a cable having an IEC female socket for the pump unit. 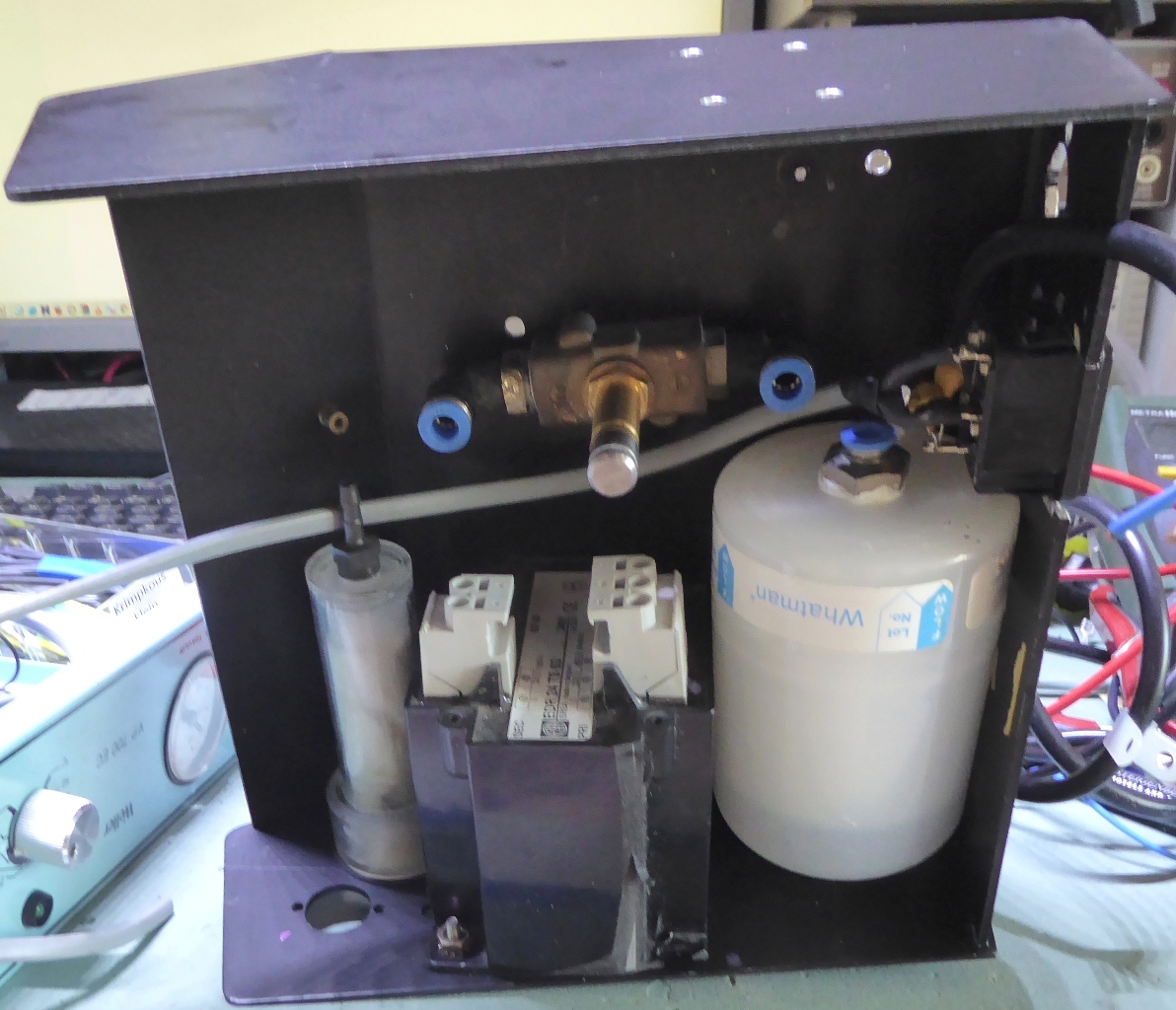 Looking for a relay to switch the external pump, it was decided to use a big SSR, an OPTO 22 240D10.

It can easily be mounted on the metal casing, and I used it to mount a prototyping card having all the electronic parts on it.

A prototype it is, it stays, there will be no effort to make something more appealing! 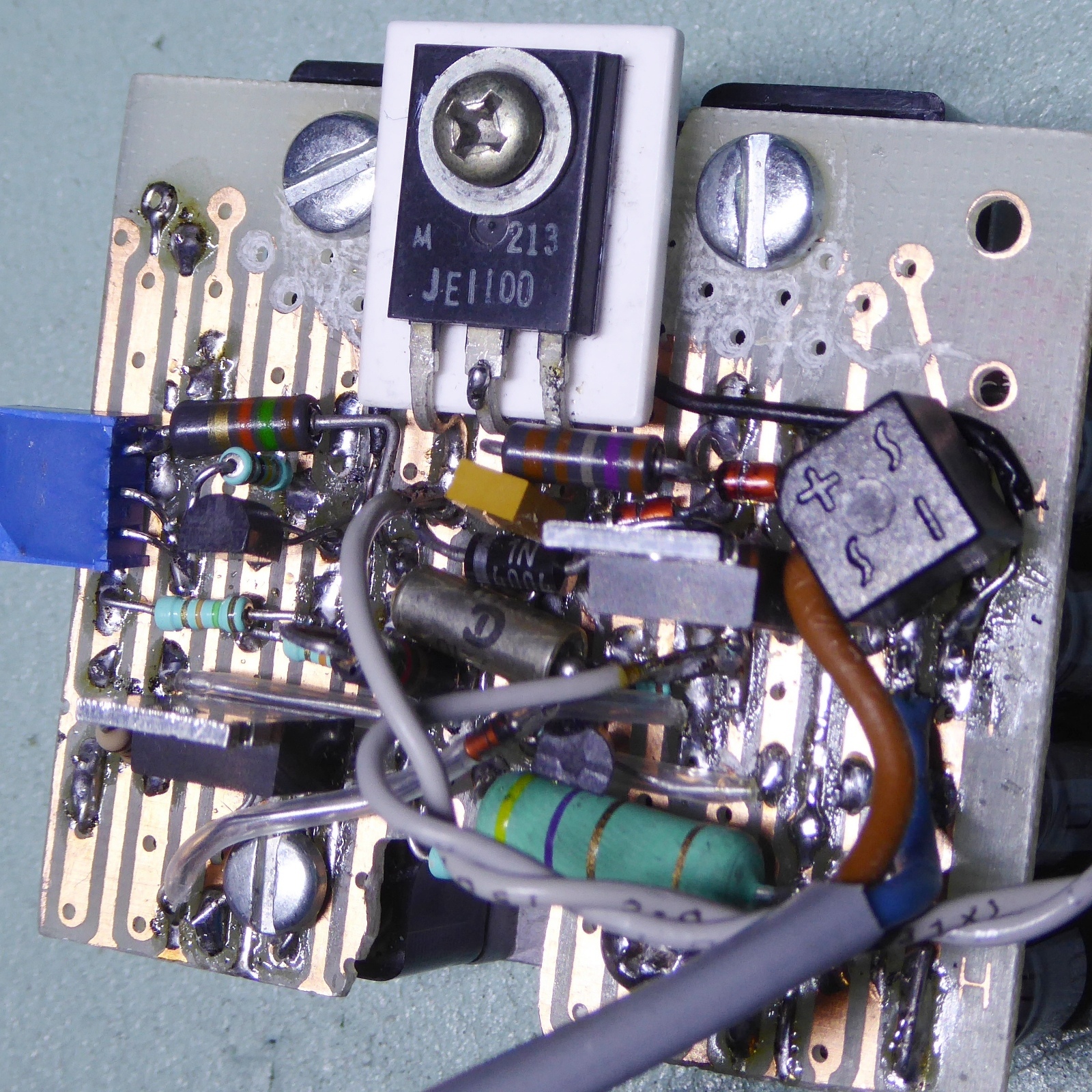 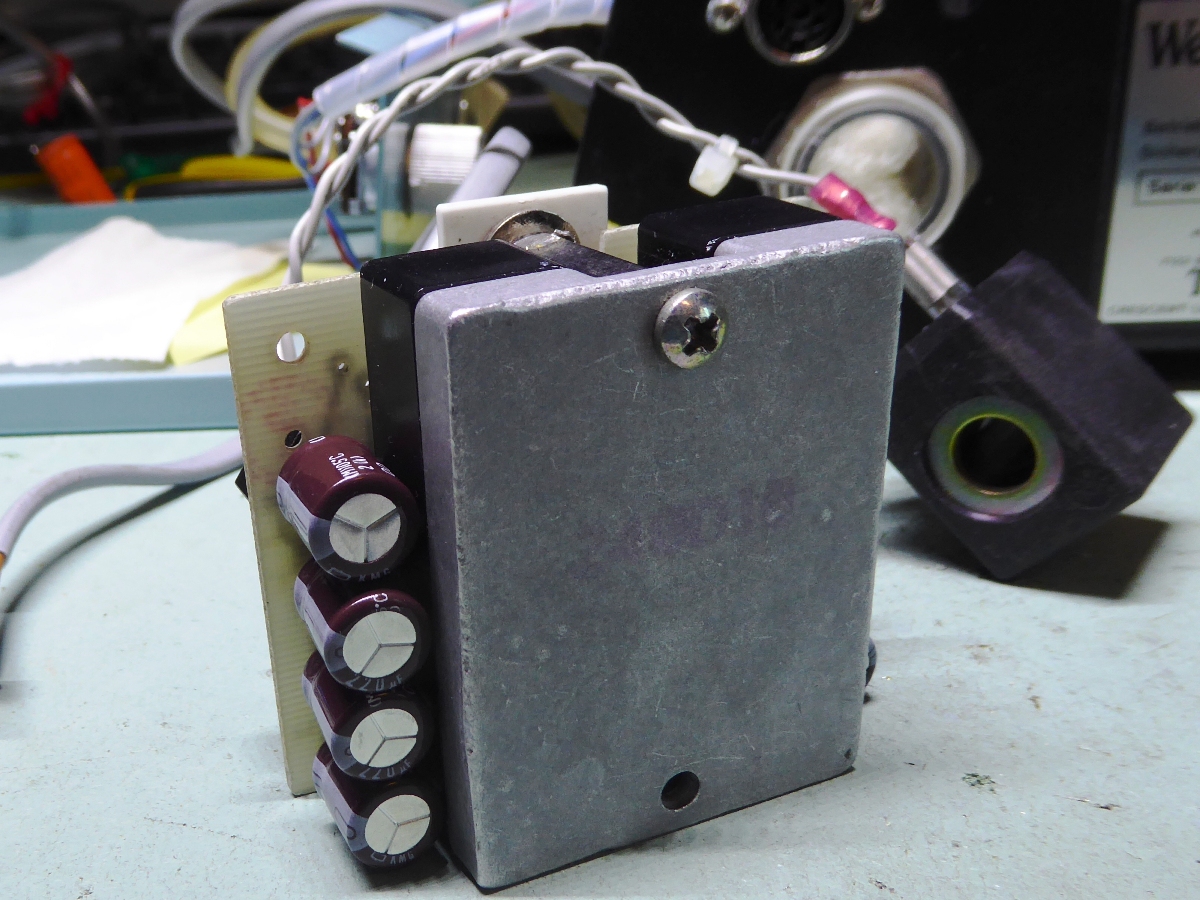 In the end, it is all a tight fit, but everything is in! 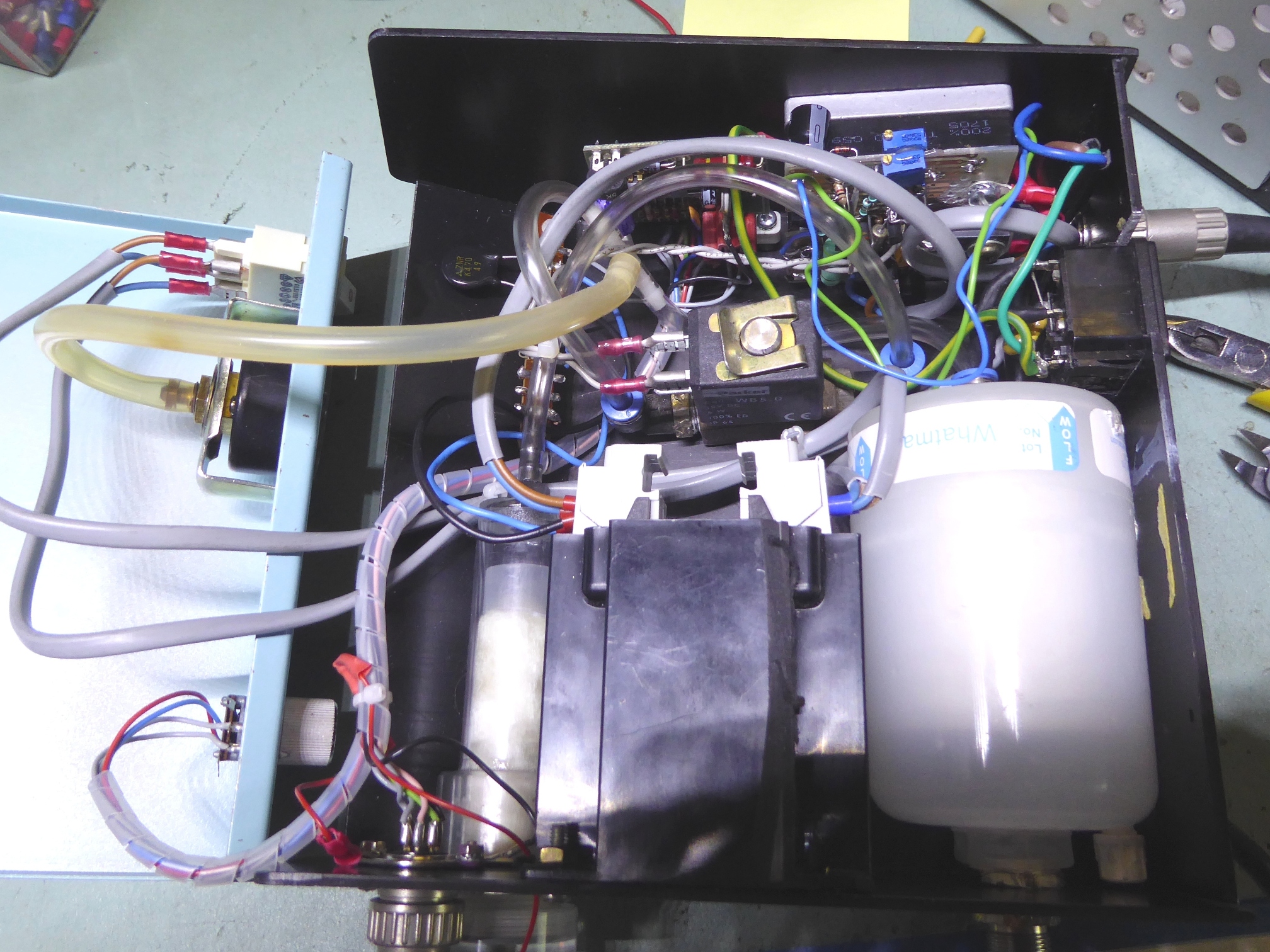 All done within a week since gathering the parts, letting the idea settle, making an available parts derived "electronic design", fabrication by mounting parts on top of each other, quick drawing a more or less complete schematic, and documenting this webpage.

The pump connects to the side of the soldering station using a mains power cable, and a 6 mm hose.

The hose directly connects to the air filter, which acts as a vacuum buffer, also

Especially when using the big 1.8mm "number 6" nozzle, which passes so much air it was useless in the old situation, it is evident it is a good performer!

The module schematic, there will be NO effort spent on drawing a neat electronic version.

The 24Volts AC is rectified and then fed to a Darlington transistor having internal base to emitter resistors, eliminating a few parts.

Using two zener diodes, together it makes a 12 Volts power source, the specified voltage for the Parker air solenoid.

The middle part of the schematic indicates a 'monostable' timer, employing a mosfet transistor to switch the SSR which operates the pump.

For the Mosfet, the SSR more or less acts like a 1kΩ resistor.

Tapping the footswitch, the pump runs for about 3 minutes

The other part of the schematic indicates an alike timer, this one switches the solenoid.

Tapping the footswitch, air is sucked by the desoldering iron for around two seconds.

A reverse switching voltage protection diode is mounted over the solenoid. 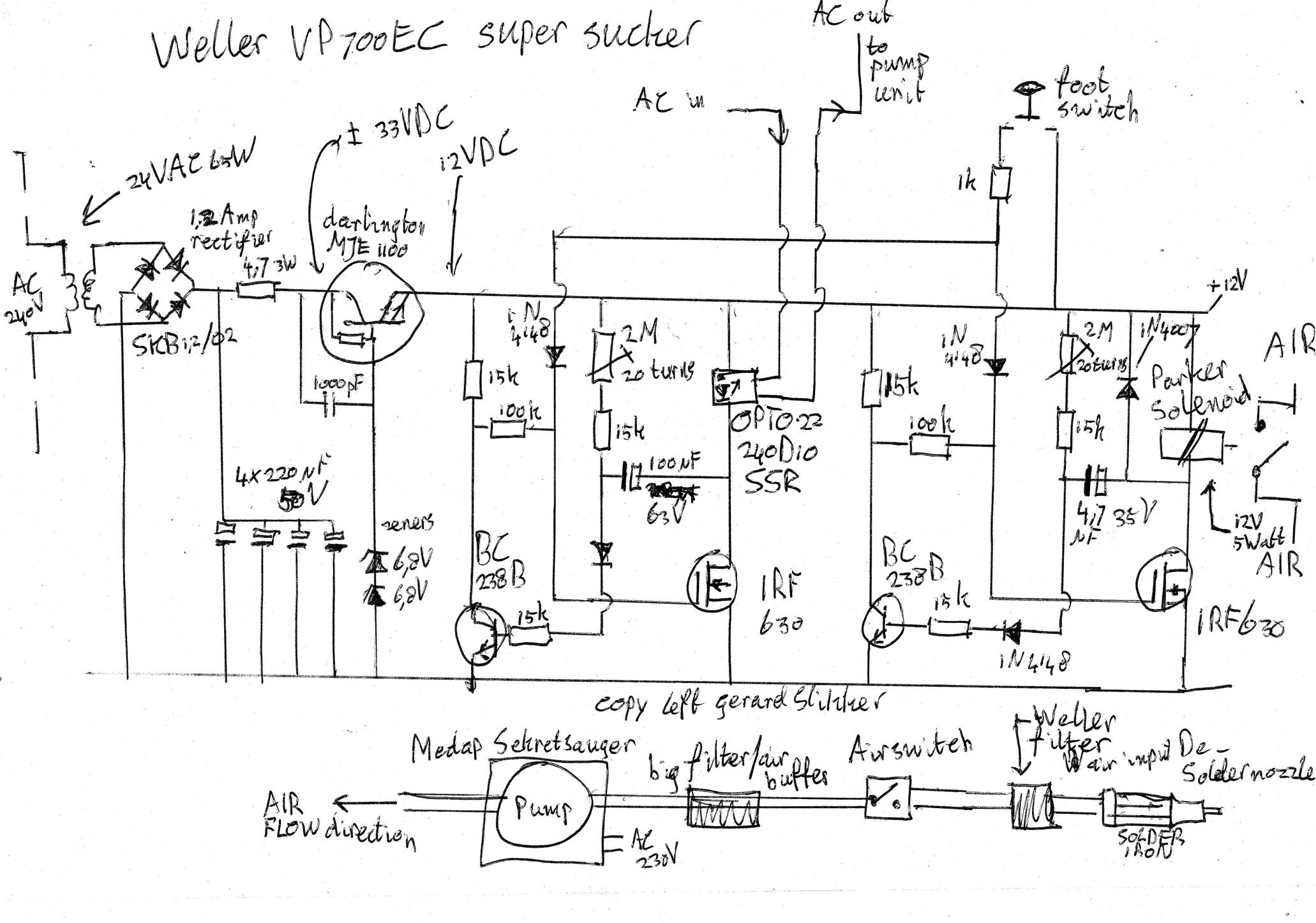